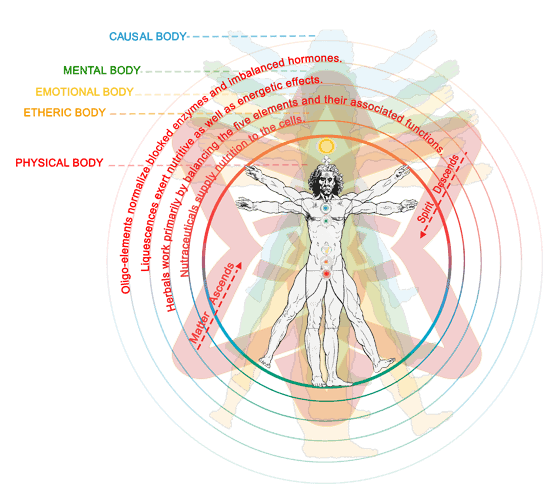 “Our aim is to bring you the best natural healing available by combining the wisdom of all medicine systems with modern science. We work day and night in order to ensure that you wake up in a world where you never hear the words “there is no cure”. Our goal is to take you from Dis-ease to ease and from medication to meditation!!”** – Apurve, founder Biogetica

Biogetica has a unique and comprehensive Holographic model of healing which synthesizes all the medicine systems to simultaneously ease physical, mental, emotional layers of Your Being. Biogetica harmonizes your entire being naturally by appealing to the balancing forces of nature. From medication to meditation is the Biogetica way! We are here to help you Bloom!**

Each cross disciplinary Biogetica kit is designed to work in the following ways:**

Biogetica’s approach to healing** is based on the following:

“All matter originates and exists only by virtue of vibration.” – Max Planck (Nobel Prize winner and the father of Quantum Physics).

You, as a living, thinking, feeling, vibrating being, are much more than a collection of inter-related chemical processes. You are life itself. Life can never be reduced to a series of chemical reactions as chemical reactions cannot create life. Every thought, emotion, vibration or action leads to a series of chemical changes in the body. All ailments are a result of disharmony in the life force. Biogetica recognizes this and balances the ENTIRE BEING, bringing mind, body and soul into harmony, for lasting results**. Treating an ailment on a molecular level alone, seldom has a lasting effect as the untreated social, emotional, mental, spiritual and energetic patterns cause the ailment to manifest once again on a physical plane. Holistic healing is necessary for lasting relief**. Biogetica, therefore, uses Resonance Homeopathics to harmonize the entire being; flower essences to attune the mind; Ayurvedic, Tibetan and Chinese herbs to balance the energetic and the physiological manifestation of the five elements; and nutraceuticals to coordinate cellular nutrition.**

It is now a known fact that every thought and emotion has a corresponding peptide secretion from the hypothalamus. Each cell has numerous receptors for these peptides, and the peptides greatly change the state of the cell. Hence, each thought or emotion is a signal that changes the state of our cells and alters our being. When our mind is panicky, every cell in our body is in panic. Biogetica, therefore, works on emotional and mental levels, along with cellular levels, in order to ensure that the entire being is brought into harmony** – from the subtle emotions and thoughts, down to gross cells and vice versa. This is our understanding and implementation of holographic healing.**

The Earth is blessed with natural remedies and healing mechanisms. It would be wise not to ignore them. The intelligence of nature is much greater than that of man. Unfortunately, man still focuses on chemical medicines, as they can be patented and sold for huge profits. Allopathic attempts to treat chronic ailments by interfering directly with the chemical processes using man-made substances, has essentially been a failure. We claim to be cracking the gene code, but we still can’t cure a cold with man-made substances!!! Homeopaths and naturopaths the world over will claim to cure a cold most times.** However, their methods are never studied and verified by governing bodies, as there is no one who will spend millions obtaining an approval on herbs, knowing that they cannot be patented and sold exclusively by them.

The most sophisticated of pharmacies are within the body. Biogetica’s methods simply remind this pharmacy within the body to produce what it is meant to.**

There is an intelligence that maintains equilibrium in all nature. Some would call it ‘Spirit’. Every being functions with a precision way beyond our comprehension. Over the years, Homeopathy, Ayurveda and numerous other healing systems have documented the fact that appealing to this intelligence or function of homeostasis is the most appropriate way to bring a being into lasting equilibrium.** Over time, we have learnt that interfering with a body’s chemical processes only causes further complications, as this essentially goes against the balancing homeostatic forces of nature. When we inject something artificially, the body stops making the effort to produce it on its own.

Below are some examples that illustrate our point:**

A. Homeopathic coffee is coffee diluted past 10^6 and potentized. There are no molecules of coffee left in the mixture, but the water remembers the informational vibration of the coffee molecule. When ingested, this mixture alters the vibration in the water, which composes 70% of the human body. The body is instantly given information on a new vibration which will keep it awake and compensates by putting you to sleep. Sounds far-fetched? Try it!

B. A Diabetic person’s pancreas produce inadequate Insu, causing an imbalance in his/her blood glucose levels. Western Medicine combats this by injecting the patient with Insu, which could cause the Beta cells to slacken further and eventually reduce and even hamper normal Insu production.

Natural sciences prescribe to stimulating the pancreas to regulate the Insu production, instead of dosing the body with the hormone artificially. This is traditionally believed to be accomplished by providing the body with Ayurvedic herbs that heal gross abnormalities in the pancreas, and further by supplying vibrational information of Insu and healthy pancreatic tissue, to remind and stimulate the pancreas to function regularly.

C. A Herpes patient gets recurrent outbreaks because the virus remains dormant in the nerve bodies and attacks whenever one’s immunity is compromised. Biogetica administers a nosode containing energetic information on the virus. Each dose is believed to serve as a reminder for the person’s immune system to fight the virus at its basic level, while it lies dormant. Herpes nosodes are not a herpes cure, herpes treatment or herpes vaccine. They are used in accordance with Homeopathy’s “like cures like” principle. The use of nosodes, such as ‘2LHerp’ for healing Herpes, was studied by independent researchers in the UK. They found that nosodes benefited 82% of the patients! We augment nosode therapy with herbs from numerous traditions. Together, they may support normal structure and functioning of the immune system.

4. ‘FROM MEDICATION TO MEDITATION’:**

We work, day and night, in order to ensure that you wake up in a world where you never hear the words ‘there is no cure!’**

Please visit this link for a TV interview that discusses our approach.

Ayurveda & Homeopathy may or may not qualify as medicine in your home jurisdiction. The complementary advice of our practitioners who are considered Homeopathic and Ayurvedic Doctors in some jurisdictions does not replace the medical advice given by your primary care physician. Biogetica’s Homeopathic products may be used for treatment of self limiting over the counter ailments in USA, India & Europe that support Homeopathy for OTC use. Biogetica’s Herbal remedies from the Ayurvedic, Chinese and other traditions may only be used to balance the 5 elements and rejuvenate organ systems in countries where Herbs, Ayurveda and TCM are not considered medicine. Biogetica’s ground breaking supplements may only be used to support the ideal structure and function of the various systems in the Human Body.

* This peer reviewed and published research has most probably not been studied or approved by the FDA in your country as a treatment or cure. Hence no disease claims can be made and you are welcome to take the natural ingredients for (immunity, lung health, cardiovascular health, etc). Homeopathy is medicine in USA but only for OTC issues. Ayurveda is medicine only in India and TCM is medicine only in China. Switzerland supports insurance payments for Homeopathy.

The product’s claims are based only on theories of homeopathy from the 1700s that are not accepted by most modern medical experts.

† All Homeopathic products are made in accordance with the Homeopathic Pharmacopoeia of the United States, a document which has been published for over 100 years and which is recognized as an “official compendium” by Sections 501(b) and 502(e)(3) of the Federal Food, Drug, and Cosmetic Act, 21 U.S.C. 351(b) and 352(e)(3) (“FD&C Act”).” These indications are based solely on traditional homeopathic use. They have not been evaluated by the Food & Drug Administration.

†† These testimonials are unsolicited and unedited except for the name of the sender. They contain the senders’ initials or first name only for purposes of privacy. These are actual emails from many we were able to help over the years. Testimonials represent a cross section of the range of outcomes that appear to be typical with these products. Your results may vary. We do however stand by our products and will refund you completely if our products don’t meet your expectations.

What we do is simply point you and your Doctors to independent research from all sources that we know of, on the ingredients or entire formulation of our natural products, which are Herbal, Ayurvedic, Bioenergetic, Homeopathic and Complementary in nature. We invite you to read these studies on our clinical trials page or on scholar.google.com. Results may vary from person to person as is depicted in the wide range of results seen in the clinical trials.

0
0
Your Cart
Your cart is empty
Apply Coupon
Use coupon code "bloom" for 20 percent off today!
FrançaisDeutschPortuguêsEspañolрусскийमानक हिन्दीEnglish